Waleed Rashidi currently works as a professor in the Communications department at Cal State University, Fullerton. He has extensive experience in the music industry and a passion for understanding upcoming trends in entertainment. As a collector of thousands of vinyl records, hundreds of CDs, and an avid music listener, Rashidi’s interest in music motivates his career as well as his research. He estimates he possesses around 3,000 – 4,000 vinyl records.

At the start of his career, Rashidi’s undeniable passion for music led him to an opportunity to work as a reporter in the music industry. As he gained experience, Rashidi eventually ran his own music magazine for several years in southern California.

After working as a journalist and for the magazine, Rashidi worked as a full-time musician playing in a band. Working as a live musician on the road gave Rashidi knowledge and experience of what it is actually like to work as a touring musician. Therefore, he truly knows the details of the industry, as he has delved into every corner of music.

All of Rashidi’s passion and experience culminated into his successful career as a professor and researcher. Rashidi works with students in the Entertainment and Tourism concentration to help them better understand the inner mechanisms of the music industry. He is also the club director of Cal State Fullerton’s Entertainment and Tourism Club, working closely with students to help them coordinate networking events. Collaborating with students on projects and observing rising trends in music delivery formats, Rashidi gained an interest in how companies within the music industry reach consumers through products. This eventually led him to his research of retro-modes of music delivery such as vinyl, and mainly, cassette tapes.

(Examples of modern recreations of retro-music products and their prices)

Rashidi’s interest in musical product formats and the delivery systems of sound led him to his research on the rising popularity of cassette tapes. Despite them being a non-modern way of listening to music, Rashidi’s research shows how vintage ways of enjoying one’s favorite tunes are coming back in-style and how nostalgia may be the root cause.

In a class of about 100 students, Rashidi noted that about 2-3 students per class said they were consumers of music in the cassette, CD, vinyl form which got him to think that there had to be more of them. He was shocked to find out that cassette tapes and vinyl record listeners were not as long gone as he had hypothesized. Using both of his passions for learning and the music distribution industry, Rashidi was inspired to get to work.

This study, done in 2018, can still give an insight on trends in these specific music product formats and delivery systems in 2020. Rashidi’s research pulls examples from popular culture that are relevant and important to keeping the cassette, CD, and vinyl forms of music consumption alive. Outside of young adults who might have grown up with parents who might have taught them how to use these more elaborate ways of listening to music, some millennials, among other young adults, have become a part of this music consumption medium by buying into pop culture’s re-introduction to these products. The nostalgia for consuming music in this elaborate way is only growing with the help from popular artists like Billie Eilish, The Weekend, and even from the movie soundtrack of The Guardians of the Galaxy.

Rashidi recruited participants for this study by making personal phone calls along with work phone calls and even posting on online bulletin boards. A troubling issue he faced was getting participants who fit the predetermined qualifications; they must be a millennial, participants must be 18 by the day of being interviewed, and they would have to have used a cassette tape in the last two years. Finding participants who met all of these qualifications were unexpectedly taking longer to recruit so he decided to post on a nationwide message board for help. After interviewing the participants and gathering the data, finding connections among the participants went well and offered an abundance of new information to present.

Rashidi used qualitative methods in his research because of his journalistic background, which made him equipped to interview others. His research required talking to his participants at length, either in person or on the phone, and the more information they communicated with him, the more he had to build on. Rashidi was able to pull rich and depth data from his participants, and his journalistic background allowed him to summarize and find commonalities and themes from their responses. He also notes being able to distinguish and explore the differences between each of the respondents.

To interpret his data, Rashidi broke down his results into thematic categories, creating a sense of structure that was definable. He then broke them down further into primary and secondary themes that are listed in the results section. Some of these themes include initial discovery, purchase experience, and uniqueness. 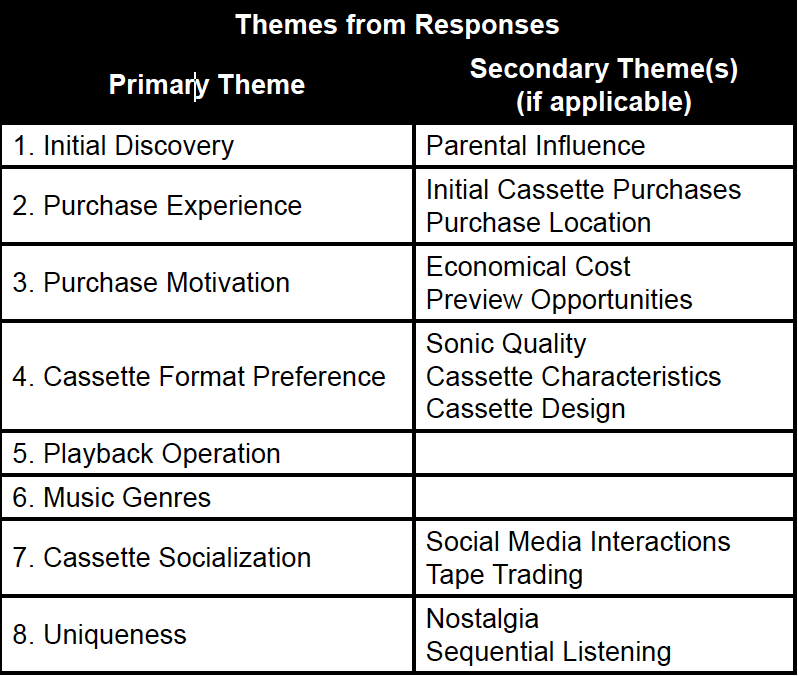 The interpretations of his study are detailed in his discussion. In response to RQ1 (What are the cassette tape purchase experiences of millennials?) Rashidi found that availability and introduction to recent cassette playing were a big part of participants’ purchase stimulation. Several points that participants were divided on were the acquisition of used versus new cassettes, types of retailers, and musical selections. Addressing RQ2 (What are the cassette tape playing experiences of millennials?), there was a range of answers pertaining to devices used, types of players, and opportunity. Lastly, in reference to RQ3 (Why do millennials prefer to use cassette tapes in addition to, or instead of, other forms of music media?), appreciation for the sonic quality of analog media and nostalgia were consistent themes of this section. Of these findings, the points that were most surprising to Rashidi were participants’ history of past use of cassettes and their collective nostalgia in relation to it.

Beyond the music and entertainment industries, an overarching conclusion about communication and society as a result of his research reveals that obsolete media triggers nostalgia.

Rashidi has also started other research that he is very interested in. In March of 2020, he finished a round of interviews for his latest research study. He was interviewing people who run record stores and asking them whether streaming has affected their sales as a retailer. He wanted to know what ways streaming had affected it. Not only was he curious about streaming, but he was looking at other types of formats that have affected their record stores. He explains that record stores primarily sell vinyls, CDs, t-shirts, posters, and occasionally cassette tapes and CD players. He interviewed about fourteen people before the pandemic hit and he plans to continue this research when stores can open again in a few months. He interviewed people who have been in the business of selling records for a minimum of twenty years. He did this because he wanted to talk about other “threats” to the retailing of records that have happened prior to streaming. He explains that new devices from the 80s, 90s, 2000s, and 2010’s have all created new threats to record retailers. In the 1980s, when cassettes became popular, there was a campaign called “Home Taping is Killing Music.” The problem was that the record industry was afraid that people would buy cassettes and copy the vinyl records onto the cassettes for their friends. This would affect the industry because their friends would not want to buy a new record. So this new idea of being able to replicate music was a new issue for record retailers and so he interviewed these retailers to see whether this truly affected their sales. He also asked about the next issue of CD burners that arose in the 1990’s. Like cassettes, people were beginning to burn CD’s for their friends which also had a major potential to threaten the record retailing environment. The 2000’s revealed another threat when Napster became popular and everyone began to download illegal mp3s. The latest possible threat he asks about is if streaming has created more challenges to the record retailing environment during the 2010’s. He wanted to know that out of these four eras, which was the most and least threatening to the record retailers.

Rashidi also has another study published in a journal that is focusing on how a particular music scene was formed in a particular area and region. He was looking at the Inland Empire music scene, San Bernardino and Riverside county primarily, pre-Coachella. He wanted to know what was happening in those areas before Coachella and how it was reported in the music press such as music magazines and newspapers. He researched the music coverage from those areas from 1989 to 1999. He discussed the contrast of what was happening in the Inland Empire compared to the LA music scene because many will say that the LA scene was more vibrant than the Inland Empire’s. Rashidi discussed that he primarily looked to research in entertainment because he teaches within the entertainment and tourism concentration at CSUF. He believes that the benefit to researching entertainment is that he is able to bring that new knowledge into his classroom. His research impacts what he teaches and he is able to put two and two together.

View all posts by alexisvigil21